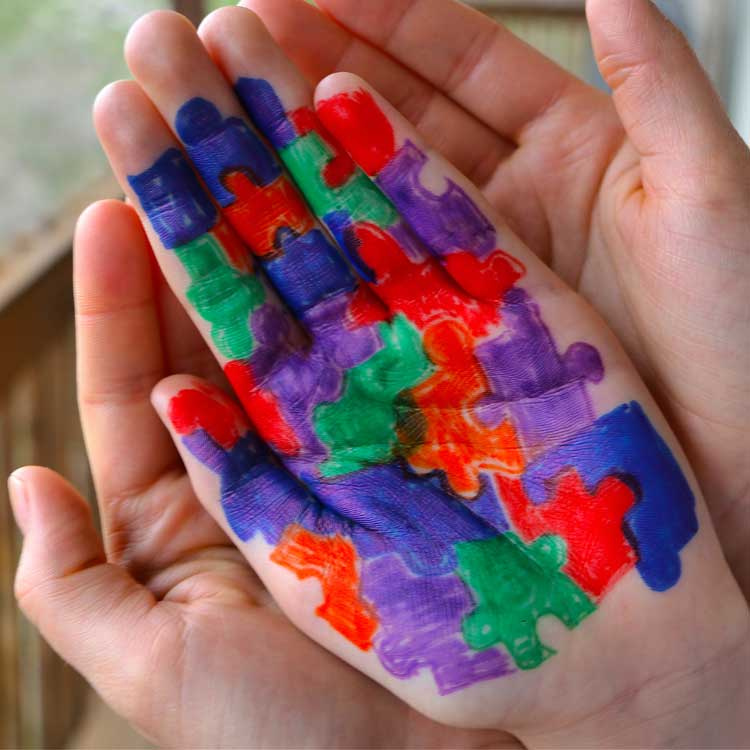 Are there types of Autism?’ I hear you ask. Not really, no. Autism exists as a continuum. Symptoms may appear profoundly in one individual and not so intensely or barely at all in the next. Different symptoms may adversely affect that next person. Autistic people are as different from each other as neurotypical people are from each other, but they all have Autism Spectrum Disorder.

Australian clinicians use the fifth edition of the American Psychiatric Association’s Diagnostic and Statistical Manual, known as the DSM-V. This is a tool that provides standardised criteria to help diagnose an Autism Spectrum Disorder. The APA updates the manual as advances in understanding of ASD occur.

Not so long ago there were individuals diagnosed with Autism (the classic presentation of symptoms defined by Leo Kanner in the 1940s). Then there were those whose presentation of the symptoms was different in some respects. They were said to have Asperger’s Syndrome, named after Hans Asperger, who was examining the behaviour of a second group of children half a world away from Kanner, also in the 1940s.

I’ve known people who were relieved their child received a diagnosis of Asperger’s Syndrome. They knew their child was bright, talkative, and often engaged, albeit in a different or odd way. For instance, a person with Asperger’s may follow you around talking incessantly about their favourite topic, but not discern the listener’s social cues that he or she has heard enough.

With those who present as Asperger’s, it is socialisation and how the individual relates to others that is an issue. I have no doubt families who believed Asperger’s would be easier to negotiate soon found that presenting on the higher end of the spectrum had significant challenges too.

With the APA’s most recent update of the manual, many titles we’ve previously used for people presenting with autistic traits are no longer in vogue. Asperger’s Syndrome is one of them. Pervasive Developmental Disorder-Not Otherwise Specified is another.

We’ve always known that individuals with Asperger’s Syndrome can present in a way that appears closer to ‘normal’ than those who are diagnosed with classic Autism. They may hold down jobs and maintain relationships. However, life for these individuals can be just as difficult as it is for those presenting on the other end of the continuum.

Let’s look at the diagnosing tool clinicians use, the DSM-V, and I’ll share examples of the behaviour of autistic people that match the symptoms.

When considering a diagnosis of ASD, clinicians use the DSM-V to identify: -

Persistent deficits in each of three areas of social communication and interaction. Patients must also present with at least two of four types of restrictive repetitive behaviours. These deficits must occur across multiple contexts currently and/or over time.

There will be deficits in social-emotional reciprocity, for example,

Approaching people to interact with them, in an unusual or abnormal way.

An inability to grasp normal back-and-forth conversation. They don’t instinctively know when breaks in conversation occur.

Failure to initiate interaction. Running into a game, grabbing the ball and running off with it, doesn’t mean you are playing with those already playing. An individual has to ask the players if he can join in.

The inability to understand the use of gestures or eye contact. Autistic people have expressed eye contact is too intense.

A lack of facial expressions and/or a lack of understanding nonverbal communication.

An autistic person’s body language may not match what they are saying. In fact, they may not realise that their proximity to others is a form of body language. It’s not just obvious gestures like nodding, shrugging and pouting that make up body language.

Deficits in developing, maintaining, and understanding relationships. Since humans are social creatures, this is huge! I suspect Autistic people attract the empathetic amongst the neurotypical population because the latter tend to nurture. The nurturers also get what they see. Autistics are often honest, reliable, genuine people.

Difficulty with imaginative play—Plays beside other children rather than with them.

Difficulty making friends—They don’t appear interested in other people—only in what the autistic can get from the interaction. And that’s not to say that he’s being mean. Autistics like facts and if he can learn from a neurotypical person, he will.

And difficulty adjusting behaviour to suit the social context

Clinicians will also look for at least two of four types of restricted, repetitive behaviours, activities, or interests. These need to be occurring currently and/or have occurred over time.

Repetitive motor movements (such as hand flapping), repetitive use of objects (spinning the wheels of a toy car or lining up toys) repetitive speech (repeatedly reciting a favourite scenario from a television programme.)

Inflexible adherence to routine and insistence on sameness. Varying degrees of distress at changes in routine or the moving of objects, difficulties with transitioning from one activity to another, digressing from the norm in any way, such as eating meals in different locations with different utensils.

A preoccupation or even a strong attachment to an unusual object (a child may take a toy chainsaw to bed instead of a teddy). An individual may fixate on interests with an intense focus. The interests are often not constructive to anyone else (e.g. repeatedly writing variations of the same story because it brings pleasure.)

Hyper or hypo reactivity to sensory input or an unusual interest in sensory aspects of the environment. There can be apparent indifference to pain or temperature (walking on a broken foot or wearing multiple layers of winter clothes in the summer.) An adverse response to sounds (not being able to tolerate a single violin, for instance, yet the individual may enjoy an orchestra). Not being able to endure certain textiles or a garment’s seams or manufacturer’s tags on clothing. There can be excessive touching of an object because the sensory input from the touching is pleasurable. Excessive smelling - certain inks or dyes in paper or clothing, for instance. Fascination with lights or movement.

These symptoms must be present in the early stages of development. Remember that not all symptoms will manifest in the one individual. Some symptoms may not be noticeable until social expectations exceed the capacity of the individual to cope. I have seen doctors hesitant to diagnose a child until he goes to school, when the deficits become obvious (when non-autistic children are interpreting social nuances for instance, or when they can use reasoning to transfer from one situation to another but the autistic children cannot.)

Adults will often learn strategies to mask symptoms. Individuals learn to cope with situations because they know resistance may be socially inappropriate - or to be seen to be resisting may appear to others to be illogical and unacceptable.

Symptoms can cause clinically significant impairments in social and occupational areas of life. It is not unusual to see people with multiple degrees or PhDs who cannot gain employment because the social or teamwork aspect of a job may be too challenging.

Okay, so now you’re familiar with what’s in the DSM-V; the symptoms clinicians will look for. And I’ve given some examples of behaviours you may observe. Now you know that if you have a child with Pervasive Developmental Disorder-Not Otherwise Specified, Autism or Asperger’s Syndrome, and some other conditions not spoken of here, you have a child with Autism Spectrum Disorder.

If a child has marked deficits in social communication, (the disorder once called Semantic Pragmatic Disorder), but does not otherwise meet criteria for ASD he/she would be tested for social (pragmatic) communication disorder. The reality is, SCD can, and does, exist apart from ASD. My son meets the criteria for both ASD and SCD. so his diagnosis is Autism Spectrum Disorder.

So, to answer the question ‘Are there types of Autism?’ I would say this. Autism exists on a continuum, and a person may present with many symptoms or just a few at any one time. Symptoms may wax and wane depending on education, maturity, and level of anxiety. Autistics are as different to each other as neurotypical people differ from each other. No matter the presentation, these people all have Autism Spectrum Disorder.

The good news is, early intervention (for infants) and setting all autistic people up for success will significantly reduce challenging behaviours. And they will brighten our world.